Sure, it can be a bit chilly out there, but we’ve picked some ideas that will keep you out of the cold.

New Zealand is bristling with fantastic galleries and museums, all of them warm and dry.

The iconic Auckland War Memorial Museum is packed with exciting, interactive and family-friendly exhibits, Māori taonga and moving reminders of our military past.

In New Plymouth, the Govett Brewster and Len Lye Centre is a visual treat for young and old. Even if you’ve travelled the world over, even if you have the most jaded architectural eyes, you’ll be impressed by this building. Inside, the centre is home to gallery spaces, kids activities and a cinema screening short films, documentaries and features.

If it’s too muddy on the sidelines for a dose of our national sport, head to Palmerston North where you can stay comfortably clean and dry while appreciating everything rugby-related. The New Zealand Rugby Musem, part of Manawatū’s Te Manawa Museums complex, contains a wealth of riches for the footy fanatic and the merely curious alike.

And don’t forget Te Papa Tongarewa. New Zealand’s national museum in Wellington is a great place to while away a rainy day. Celebrating 20 years of surprising, delighting and informing visitors, Te Papa delivers, amongst other things, a truly inspiring and interactive look at New Zealand’s history and culture.

These cut-outs by Richard Killeen can be hung in any arrangement. For the artist, this allows for works that are ‘more democratic … than conventional framed painting.’ How the viewer interprets the relationship between the shapes depends on their own associations and collected experiences.” … Fish often feature in Killeen’s art, symbolising religion, culture, death, rebirth and evolution. You’ll also notice his interest in Egyptology - the shapes include ancient pots, stone turtles, and mummification clamps. … To create his cut-outs, Killeen drew invented images, and also traced or photocopied pictures he found in zoological, museological, and botanic texts.

Changing into a swimsuit when the temperature is in single digits may not be everyone’s idea of a good time, but with New Zealand’s selection of hot pools to choose from – approximately 107 nationwide – stripping down to lycra is well worthwhile.

The geothermal areas of the central North Island are an obvious starting point for taking to the waters, and Rotorua is the epicentre of the centre. The alkaline mineral pools have given rise to some serious spas – the best known and located being the Polynesian Spa on Lake Rotorua’s edge. Soaking in a pool at twilight while looking out over the lake – does it get any better than that?

@polynesianspa is the perfect spot to sit back, relax and unwind in this wintry weather @RotoruaNZ

In Taupō, you’ll also be spoilt for choice with the trifecta of AC Baths, DeBretts and the nearby Wairakei Terraces. For something a bit different, there are also thermal springs on the edge of Lake Taupō itself. Look for the steam coming off the water, near Lake Terrace at the end of the Napier–Taupō highway, and carefully lower yourself in for a burst of warmth.

Further south you can visit the slick spa resort of Hanmer Springs in Hurunui. Outside Iceland, there are few places in the world where you can enjoy the experience of lying in soft mineral water heated by thermal springs when the ground around you is covered with snow and there’s a biting southerly blowing down from the tops. You can at Hanmer though.

Chill for 48 hours, dust generously and serve - perfect 😍. Love this village. Thanks to @barekiwi for the stunning photo. #beautiful #whitewonderland #hanmersprings #chill

It doesn’t matter if it’s raining if you’re underground. What better season to appreciate New Zealand’s geological wonders than winter. Did you know that underground, the air temperature is constant year round, so even if it’s freezing outside, you won’t get too chilly under the earth.

In Waitomo, you can enjoy the subterranean wonders of the Ruakuri and Glowworm Caves. Set in a weird and wonderful tract of karst landscape – where weathered limestone and marble outcrops form outlandish shapes on the surface – the caves are one of the wonders of the world and have been a tourist drawcard since the early days of European settlement.

Up close and personal with some of the glowworms found inside the Waitomo Caves. 📷: One of @capturenz top #HamiltonWaikato shots #Waitomocavesnz #Waitomo #glowworms #newzealand #nzmustdo #ruakuricave #Waikato

Further south, you can cruise across Lake Te Anau to the Glowworm Caves. To sit in a boat deep beneath the Fiordland peaks and see glowworms reflected in the still water was a truly magical experience.

For many years, these caves we lost in legend. Their presence was hinted at only by the ancient Maori names for the area - Te Ana-au - which means 'caves with the current of swirling water'. They remained hidden until 1948. ・・・ 📷: @_beaniesandbikinis

While not technically caves, the tunnels of the Karangahake Gorge in Coromandel also make for a great all-weather outing. The historic walkway follows the old railway line between Paeroa and Waihī, giving access to impressive remains from the mining and railway eras, including a well-lit 1,100m-long former rail tunnel. 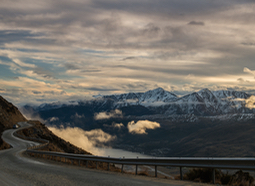 Winter is the most hazardous time of year for driving, with frost and ice occurring throughout the country and snow in areas like the central North Island and the alpine passes of the South Island.

On underwater walkways, you can lock eyes with everything from urchins and octopi to stingrays, sharks and that little fish with the big rep, the piranha. Read the story . . .

Known as Roto-Vegas for good reason, the Rotorua tourist trail is bright, exciting and loaded with thrills.  Read the story . . .

There’s not much better than lounging in hot mineral water when the ground around you is covered with snow and there’s a biting southerly blowing down from the tops. Read the story . . .

Winter is the most hazardous time of year for driving, with frost and ice occurring throughout the country and snow in areas like the central North Island and the alpine passes of the South Island.