It’s not that long ago that Matakana was just a bend in the road between Warkworth and Leigh. Now it’s a byword for gourmet food, top-quality wine and arthouse cinema. 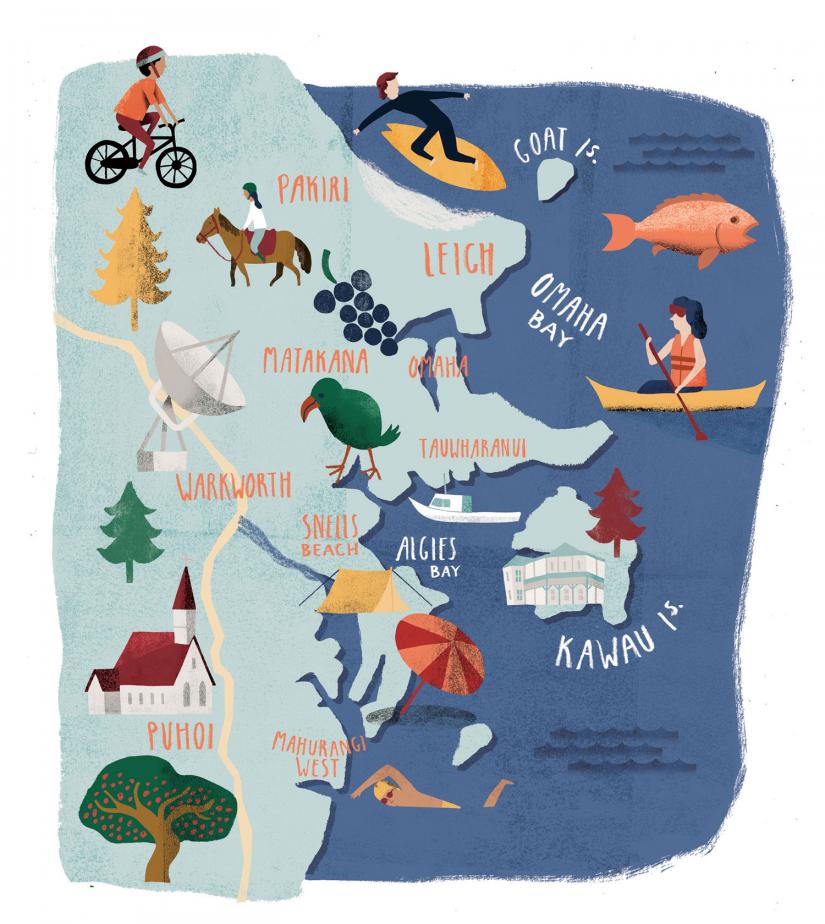 The small town’s proximity to Auckland, enhanced by the opening of the Northern Gateway Toll Road, plus the actions of a forward-thinking developer and a concentration of local producers, have come together to create a weekenders’ paradise loved by Aucklanders and those from further afield.

Matakana itself is still a small town, but at weekends it’s abuzz. When there’s more Audis than utes, more spoodles than sheep dogs and the Four Square superette stocks freeze-dried raspberry powder, you know you’re not in your average country town. Come early if you want to get a decent park to browse at the Saturday Farmers’ Market or at the boutiques in the Matakana Village development, and be sure to have an organic ice cream.

Back in the days before it became a shopping destination, the attraction to Matakana lay under the earth. The area’s rich clay was used for brickmaking from the 1860s, and over the river from the township, potter Ant Morris set up shop a hundred years later, establishing the now iconic Morris & James pottery.

In the 1980s and '90s, with New Zealand’s swing to viticulture, it became wine country. Many producers focused on red varieties such as merlot and cabernet sauvignon, which thrive on the clay slopes, but now it’s also known for its whites as well. There’s a touch of Tuscany here as the buildings of the wineries come into view on the sunny slopes, with olive plantations adding to the effect.

While Matakana is now the go-to township, Warkworth, at the head of navigation of the Mahurangi Harbour, also has a long history. Today it’s a thriving country service town and some-time TV star (as the setting of The Brokenwood Mysteries).

The Mahurangi is a long and sinuous waterway, wending its way inland through mangroves and mudbanks. Its rich resources were prized – and fought over – by Māori, then caught the eye of European sailors well before the Treaty of Waitangi. The kauri which lined its banks became spars for naval, whaling and trading ships, and boatbuilding was one of its early industries. Now wineries and oyster farms have taken over.

Running roughly north-south, the river splits the area in two: Mahurangi West, where there is a large regional park, and Mahurangi East. Here a string of holiday settlements peters out into farmland and another two parks: the historic Scandrett, farmed by one family for 140 years, and Mahurangi East, accessed from Scotts Landing. You can also still go camping true Kiwi-style at Martins Bay, looking out onto the northern Hauraki Gulf.

Island escape at the Mansion House on Kawau! By @katefoxall #VisitAuckland

The large, sheltered bay created by Mahurangi East, the Takatu Peninsula and Kawau Island is ideal for boating, and in summer Kawau’s Bon Accord is white with anchored cruisers. The scrubby-wooded Kawau was home to one of New Zealand’s early governors, George Grey, who saw fit to populate it with his own private zoo of zebras, monkeys, wallabies and exotic birds. All that remains now are some of the magnificent exotic trees Grey planted. His home, universally known as Mansion House, is now restored as a museum, and curious (and hungry) peacocks roam the lawns. At night the house is illuminated, a ghostly floating manor reflected in the dark water.

While the white-sand beach at Ōmaha, north of Matakana, has become built up with Auckland-style holiday homes (the word ‘bach’ is hardly appropriate for these luxury retreats), Anchor Bay at the end of the Tāwharanui Peninsula, looking out to Little Barrier Island, is part of another regional park – and is perhaps one the best beaches in the wider Auckland region. The sand is so fine it squeaks beneath your feet, the water so clear you can see fish swimming in the waves as the surf rolls in, and now the park is an open sanctuary you have the chance of coming face-to-face with one of its resident takahē.

While the Matakana region might be full of cafés, winery restaurants and gourmet offerings, you can’t get fish any fresher than from Leigh. If you’d rather eyeball the fish than eat it, over the hill is New Zealand’s first marine reserve, at Goat Island. Snorkel or scuba-dive to get close to schools of snapper, or if you don’t want to get wet, peer into the water on the glass-bottomed boat tour. There’s also the excellent Goat Island Marine Discovery Centre, run by marine biologists from the University of Auckland.

Wend your way a little further north and you hit Pakiri, a 14km, largely undeveloped strip of white sand stretching all the way to Te Arai Point and on to Mangawhai Heads – they dredge sand from here to fix up the beaches in Auckland. Wild and untamed, it’s an antidote to the buzz of the holiday settlements further south.

Loved by the locals: Matakana

This is a land of two coasts: the white-sand beaches opening onto the benign waters of the Hauraki Gulf and the black sand shores of the west coast. Read the story . . .