Where the city runs out, Rodney begins. This is a land of two coasts: the white-sand beaches opening onto the benign waters of the Hauraki Gulf and the black sand shores of the west coast.

There is another significant waterway, too: murky and tidal but no less rich Kaipara Harbour, to the west, the largest harbour in New Zealand and one of the biggest in the world.

Heading out of Auckland city to the northwest, the urban area ends abruptly and you are in horticulture country: strawberry farms and wineries proliferate. Kumeū is now the centre of a successful wine industry, grown from the first offshoots of Croatian settlers in the 1940s. Cellar doors and restaurants abound, as well as produce shops and ice-cream vendors.

Hit the west coast and you’ve reached Muriwai, a black-sand beach which stretches 50km north to the heads of the Kaipara Harbour. Popular with surfers and a good place to play a salt-lashed round of links golf, the southern headland and the rocky islets offshore is the breeding colony of more than a thousand tākapu (gannets).

From around August to March the birds return from their ocean wanderings to the place they were themselves hatched, and you can watch them close up as they bill, coo, fight, incubate, screech and poo in glorious technicolour. 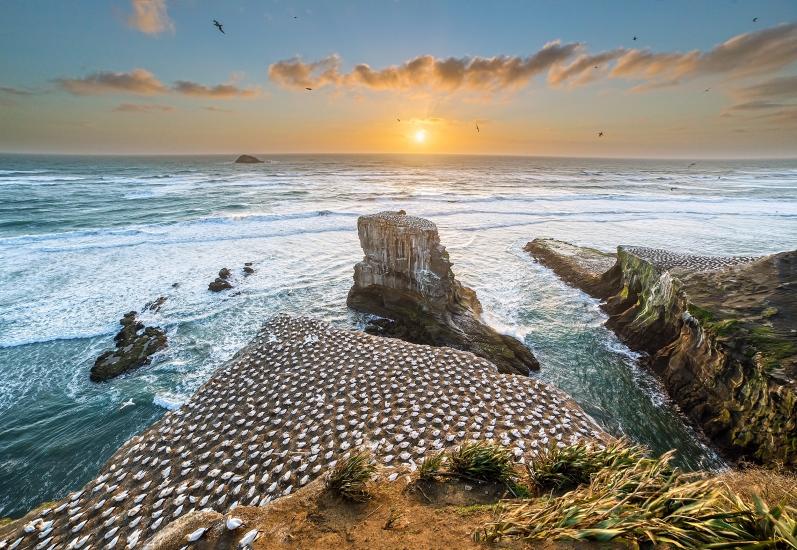 The southern headland and the rocky islets offshore is the breeding colony of more than a thousand takapu (gannets). © Anupam Hatui

Inland from Muriwai lies the Woodhill Forest, one of the Auckland region’s top mountain-biking destinations. The extensive network through the managed pine plantation has recently been enlarged and redeveloped, offering more than 100km of single-track trails, jumps and stunt zones suitable for beginners up to experienced riders.

Tourists have been coming to the southern reaches of the Kaipara for more than a hundred years to soak in the natural hot springs which arise there. The first public baths were built at Parakai in 1883, across the river from the township of Helensville, although they were little more than muddy holes in the tea-tree scrub. Today they are still coming to take the waters – and thrill themselves on hydroslides. 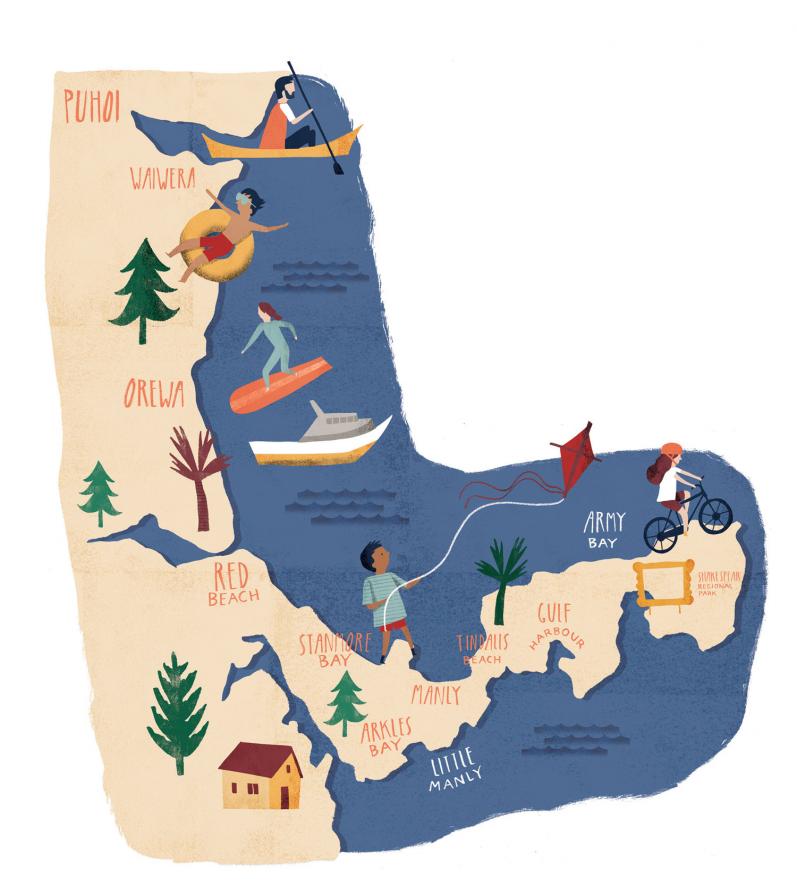 Rodney’s east coast is more benign, less windy and more welcoming. The Whangaparāoa Peninsula sticks out to signal the end of the city, the Shakespear Regional Park and open sanctuary at its tip. Bellbirds, kākā and bright green kākāriki are taking back the parkland, flying over from their protected home on Tiritiri Matangi.

Auckland or Hawaii? Tawharanui captured by @katefoxall - one of the many stunning golden sand beaches in North Auckland #visitauckland #tawharanui

Since it was bypassed by the toll road, the beach community at Ōrewa has regained its soul without the main road running through it. Its hinterland is being transformed into the suburbs of the spreading city, but its 3km-long beach looks out on the northern Hauraki Gulf.

Just to the north is another historic hot spring: Waiwera. (The area’s full Māori name, Waiwerawera, simply means ‘very hot water’.) Early travellers came up the coast by boat from the 1840s, when an entrepreneurial Scotsman called Robert Graham set up what became the southern hemisphere’s first recognised spa.

Just over the river, Graham made his homestead at Wenderholm, and today the huge pōhutukawa grove he planted forms the core of the Auckland regional park network’s oldest property, acquired in 1965. Across the Pūhoi River lies the Mahurangi West Regional Park, preserving more of this pōhutukawa-clad, sandy-shored coastline.

Kayakers cruise down the river from the historic settlement at Pūhoi, founded by settlers from Bohemia (now the Czech Republic) in the 1860s. Brought up the muddy river by canoe by Māori and deposited on the riverbank in mid-winter, the settlers were truly ‘up the Boohai’. The kauri forests which attracted them have mostly gone, but the place hasn’t changed much; the early settlers would no doubt be glad of the quirky historic pub and the Pūhoi Valley café and cheese store up the road, known for its gourmet ice cream.

This epic roadie connects the little coves, beaches and bays of the east and the immense dunes wild coastline and vast, sweeping harbours out west. Read the story . . .

Not that long ago, Matakana was just a bend in the road between Warkworth and Leigh. Now it’s a byword for gourmet food, top-quality wine and arthouse cinema. Read the story . . .

Loved by the locals: Rodney