Rangitīkei: life off the beaten track

Travelling north or south along State Highway 1, it's easy to pass through Taihape, Mangaweka, Marton or Bulls unthinkingly, missing this beauty hidden just off the beaten track.

The Rangitīkei River and surrounding countryside are truly exceptional. The landscape here is often rugged but always spectacular; perhaps it was the rugged beauty that emboldened the locals here to establish two self-proclaimed world capitals.

Rangitīkei covers the upper and western catchments of the Rangitīkei River. Starting from the river’s source high in the Kaimanawa and Kaweka Forest Parks, south-west of Taupō, and ending on the coast south of Whanganui, the district follows one of New Zealand’s longest rivers. Heading south down State Highway 1, you will enter Rangitikei District just after Waiouru and exit through Bulls or Turakina. 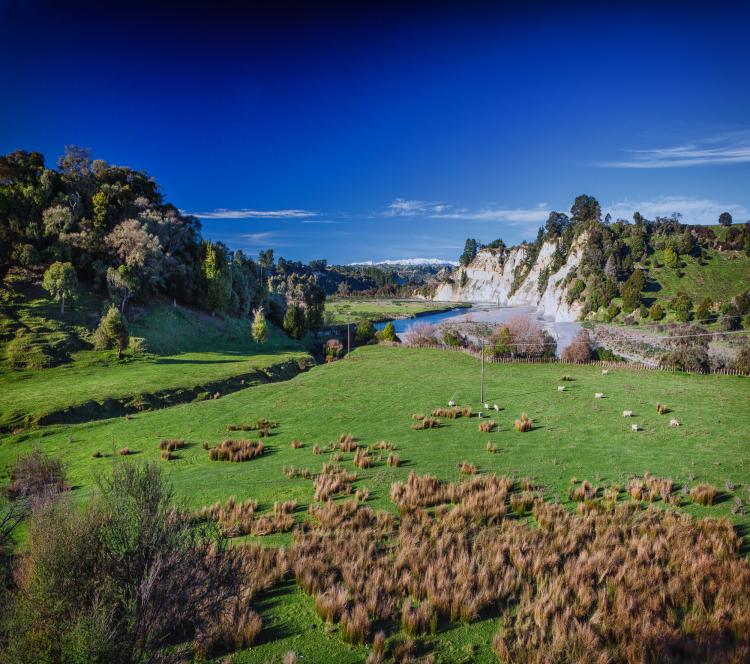 Looking across the Rangitīkei River to the papa cliffs and snowcapped Ruahine Range. © Nicholas Allen

State Highway 1 from Taihape to Bulls is never far from the Rangitīkei River and takes you through a characterful and changing landscape. In the north, around Taihape, the area is characterised by massive mudstone cliffs – papa cliffs as they are called (papa is the Māori word for ‘earth’).

Peter McIntyre, the famous New Zealand Second World War artist, expressed his delight in painting the bush and vast papa cliffs, and for good reason. The colours are spellbinding: the deep green bush, the blue-grey and white papa cliffs above the pastel blue river that intersects the lush hillside pastures.

Settlers battled their way up the river, along deep muddy roads and across dangerous fords, ready to clear the land made rich by 10,000 years of rainforest growth. They arrived in the Taihape area in 1894. In 1908, the North Island Main Trunk rail line was completed. Bridging the deep and inherently unstable papa gullies and over the flood-prone rivers made the progress of the railway difficult and this was amongst the last areas to be completed. The result of this struggle is the amazing bridges – both road and rail – and characterful buildings that you will find in the area. No doubt, the successful completion of the railway bolstered the can-do attitude that built these world capitals.

Perhaps it is the rugged beauty of the landscape that emboldened the locals to establish two self-proclaimed world capitals.

Taihape is the self-proclaimed Gumboot Capital of the World. This is, perhaps, a fitting title when you consider town’s mud-filled history. An anecdotal tale tells of a time when the mud in the main street of Taihape was so deep that it swallowed a man and his horse. However, it was John Clarke’s satirical character Fred Dagg, always in gumboots and based in Taihape, that formed the association. 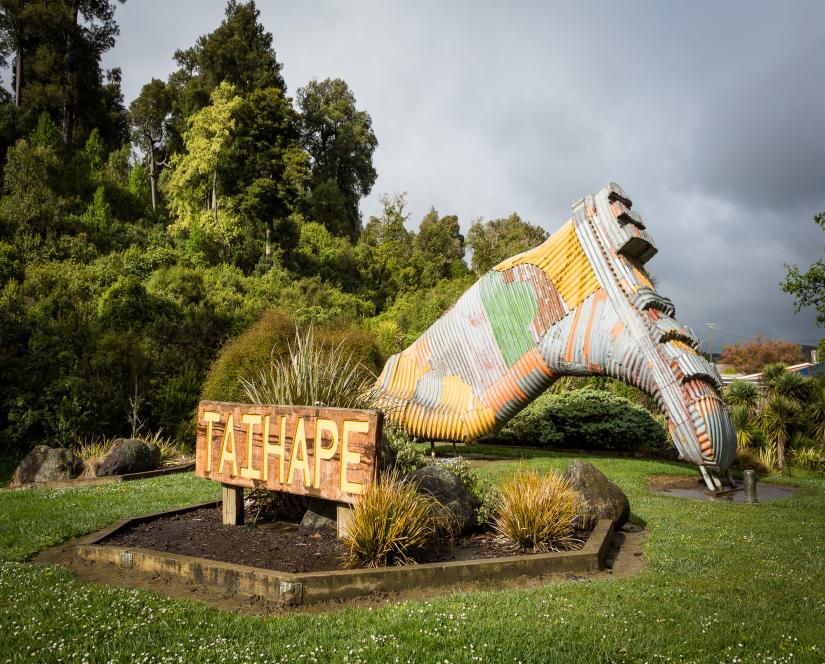 Taihape, the Gumboot Capital of the World. © Nicholas Allen

Despite the association with gumboots, Taihape is a sophisticated town with a number of great cafes and gift shops. The beautifully decorated Le Café Telephonique has a cafe and restaurant menu, as well as a selection of fabulous gourmet foods for sale. Brown Sugar Café is set in a lovely garden, serves great coffee and food, and has a delightful boutique gift shop. If boutique shopping is your thing, you should also check out Wild Roses. 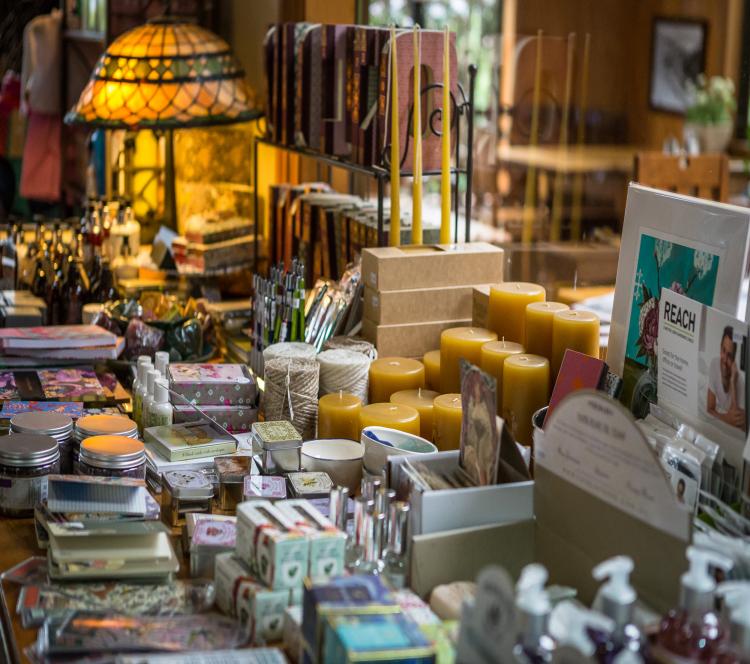 For some time out or exposure to outstandingly beautiful countryside, visit the River Valley Lodge, based a short distance from Taihape. This family-run business provides beautiful accommodation and camping right on the edge of the Rangitīkei River. I also love their amazing ethos of working with the environment and landscape to minimise their impact and maximise your enjoyment. Those looking for time out can enjoy the spa and bush walks, while those looking for excitement and great views can enjoy rafting trips and horse riding tours. 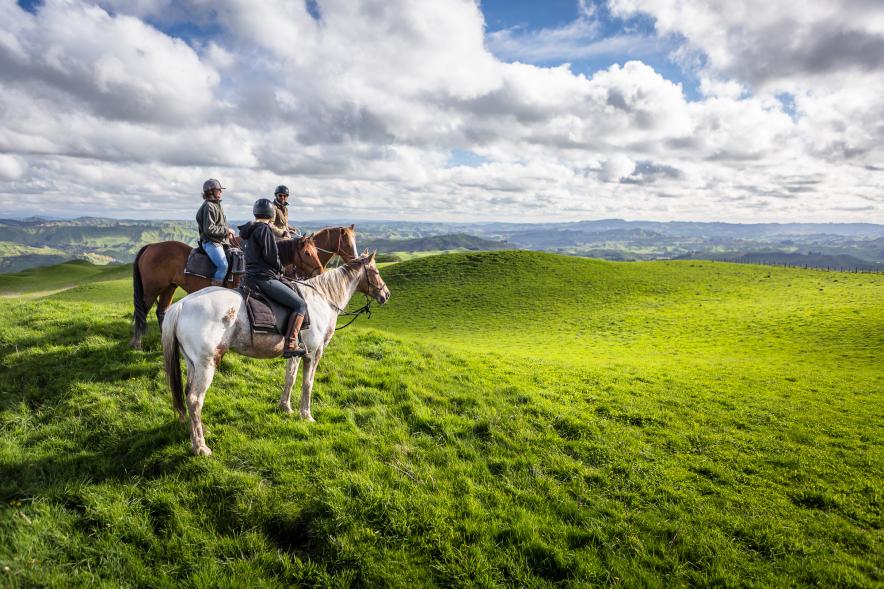 One of the things I enjoy most about the drive south from Taihape, towards Mangaweka and Hunterville, are all the poplar trees standing tall beside the road, along the ridges, and on the steep hill faces. By the 1930s, extensive deforestation resulted in significant soil erosion. In response, farmers began planting poplar trees to stabilise the soil and crop-dusting with aircraft.

Driving through Mangaweka, the first thing you are likely to notice is the old DC3 aircraft at the Mangaweka International Airport. Once a crop-dusting aircraft and then a rafting base for the Mangaweka Adventure Company, the aircraft is now a café and store. The town itself, now bypassed by the main drag, is filled with hints of old-time charm and is worth a quick look. 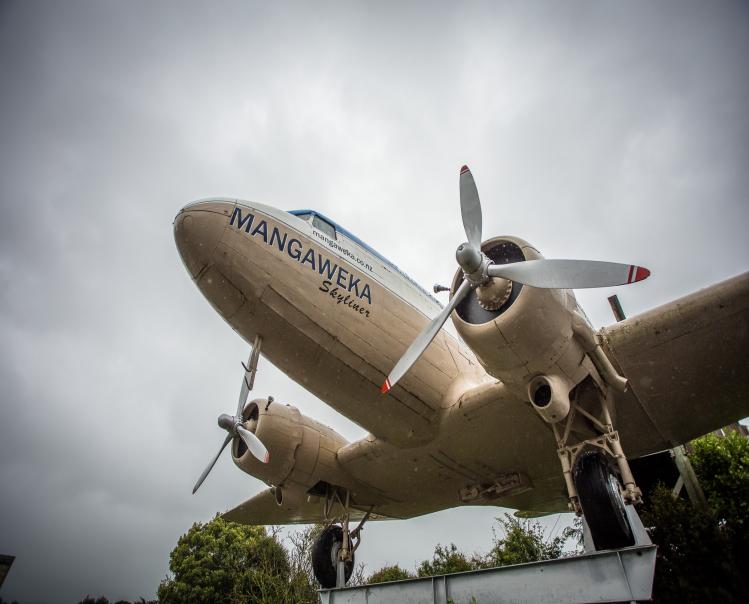 Heading south, the impressive Mākōhine Viaduct can be seen from the road just south of Ōhingaiti. When it was completed in 1902, this was the tallest bridge in New Zealand, an engineering feat that makes it a Category 1 historic structure.

The second capital you encounter on the way south is Hunterville: the self-proclaimed Huntaway Dog Capital of the World. The steep hills of the upper Rangitīkei would be impossible to farm without the help of dogs. The Huntaway is the first recognised dog breed of New Zealand origin and was breed as a general-purpose dog for the New Zealand conditions. The Huntaway dog excelled in the Rangitīkei. In Hunterville, there is a statue to the Huntaway, recognising the valuable contribution they have made in the area. Hunterville also hosts the Shemozzle, the annual Hunterville Huntaway festival. Central to the event is a challenging race designed for shepherds and their dogs. 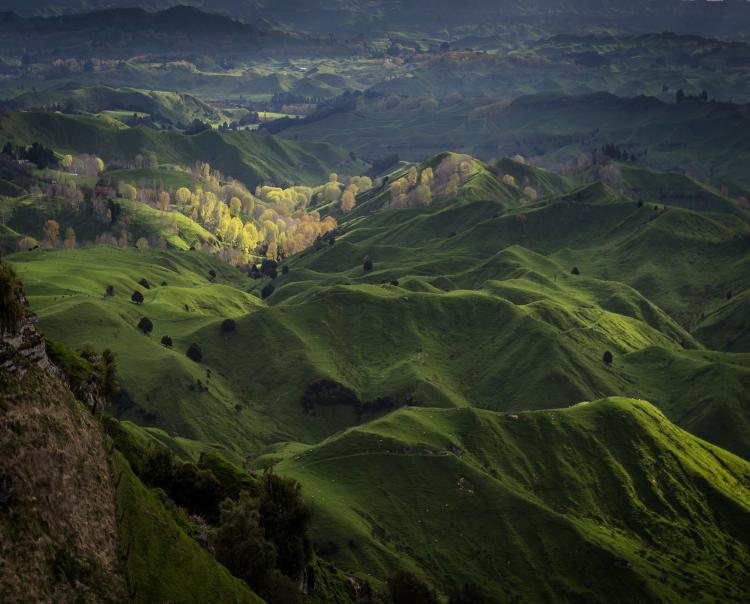 Marton is the largest town in the Rangitīkei District. Situated on young alluvial plains that are well suited for cropping, sheep and beef farming, Marton has established itself as the district’s agricultural hub. Also located at the juncture of two significant rail lines the town boomed in its early days, seen in the town’s charming and stately buildings. For a coffee stop or lunch break, make sure you pop into Sugar Plum Café.

The town of Bulls is famous for its unforget-a-bull puns. James Bull started a hotel and store in 1858 and called the place Bull Town. In time, the town became colloquially known as Bull’s and then Bulls. Located at the junction of State Highways 1 and 3, it has a great collection of used book, boutique, and antique shops, a delicious kebab restaurant, and a good selection of other cafes and food outlets. Walk the streets of Bulls and you will see a number of buildings with hilarious subtitles: the town hall is called Social-a-bull; the public library, Read-a-bull; the Mothered Goose Café, Delect-a-bull; and the local police station, Const-a-bull. Also of note is the visual pun reframing Grant Wood’s famous painting, American Gothic, with two cows.

Loved by the locals: Tararua

Do what the locals do in Tararua. Read the story . . .

Loved by the locals: Manawatū

Do what the locals do in Manawatū. Read the story . . .

Home to mighty ancient forests, protected by the work of dedicated conservationists, the Tararua District is teeming with life.  Read the story . . .

The Manawatū is a rich and deeply characterful part of the New Zealand landscape – perfect for a road trip. Read the story . . .