Less a hobby, more a religion, fishing isn't just a thing to do in New Zealand – it’s THE thing to do. For many anglers, New Zealand is the high church of bent rods and screaming reels.

Fishing is so entrenched in the Kiwi way of life that legend tells of the North Island being hauled to the surface by Polynesian demigod Māui while out on a fishing trip with his bros. In Te Reo, the North Island is known as Te Ika a Māui – Māui’s fish. Go ahead, take a look on a map, the tip of the tail is at Cape Rēinga; the head at the south, with fins on either side forming Taranaki and the East Cape. What better place then to start our fishing trip, than at the tail of Māui’s fish in the far north?

Ninety Mile Beach is synonymous with snapper, one of the most popular species targeted by recreational and commercial fishermen alike and beloved by Kiwis for their fish and chips.

Snapper are best targeted using bait, on something called a strayline rig. The most basic of fishing methods, the strayline rig involves threading a sinker or lead weight onto the line, followed by a hook which is baited with pilchard or squid. The key, after casting out, is to have as little slack in the line as possible to maintain close contact with what is happening on the end of your line. Snapper, which usually feed on the bottom for shellfish and crustacea, will often nibble or pounce on a bait before taking it and all of these knocks and bumps will be transmitted down the line. It can be hard to resist the urge to strike but wait, snapper will turn and move off with a bait once they have it confidently in their mouth. Tighten up the line, and you will usually have your fish on.

If fishing runs through these shaky isles like a cultural fault line, then the epicentre for big game anglers is surely the Bay Of Islands.

Billfish, which include swordfish and all species of marlin, as well as tuna and sharks are all there for the catching with the right heavyweight gear. Many big game charter operators sail out of Russell and Paihia, all of whom supply the gear as well as the know-how needed to target these leviathans of the deep.

A post shared by Just Another Fisherman (@justanotherfisherman) on May 3, 2017 at 3:24pm PDT

Trolling large baits behind the boat, such as whole skipjack tuna, is the way to go, and apex predators like these take some searching out, so an experienced skipper is a must for beginners. Big game fishing is not easy and there are no guarantees, but there aren't many prizes as big as a billfish in all of angling. Even if you don’t make it out on the water, visit The Bay Of Islands Swordfish Club in Russell to soak up the history and dream of your own Hemingway days.

Part of the appeal of fishing in New Zealand is the ease of access to the water, and with the highest boat ownership per capita in the world, no other country has more of its people regularly bobbing about on the high seas.

The Hauraki Gulf, sitting as it does, right on Auckland’s doorstep, is where a great deal of those anglers spend their free time. The Gulf covers a vast area of water, with many reefs, islands and inlets to fish and almost every species of fish available in New Zealand waters is found here.

Wow, what a view! 😍 Captured on an @aucklandseaplanes flight over Browns Island in the Hauraki Gulf by @aliwonderlandnz #VisitAuckland

To many, the kahawai is the peoples’ fish – often the first fish a child or beginner will catch. Its name means fast in the water and there lies a large part of its appeal. Great shoals of kahawai are now returning to the Gulf and it’s these that are responsible for the huge work ups – the sea erupting as small baitfish are attacked from fish below and the diving seabirds above. I often say that if kahawai were any larger, it would be the only thing we fished for. Hard, dogged fights with dramatic leaps, this small fish punches well above its modest weight. Target them with small lures, surface poppers or saltwater fly fishing gear. In late summer, large shoals can be found in bays, well within casting range of beaches and wharves.

Lake Taupō is the place to go for those with trout on their mind. This 600 square kilometre caldera blew its top some 26,500 years ago and the resulting crater filled with one of the most trouty pieces of water in the Southern Hemisphere.

Trout are normally targeted by fly fishing – deftly presenting small, artificial imitations of their natural food, which can be all manner of creepy crawlies that find themselves blown onto the water.

Tranquility in Great Lake Taupo. The rivers and lakes in the region are well known for rainbow and brown trout fishing. 📸: @allymcfarlanephotography #lovetaupo #gonefishing #nzmustdo #newzealand

Taupō fishing encompasses the great lake itself and many of its feeder streams and rivers. There are thousands of kilometres of water to explore and some of the backwoods fishing requires a serious trek into the wilderness, a style of angling now increasingly rare in the modern world.

Be sure to brush up on your casting technique before you go and check in with a local tackle shop to pick up any permits needed and tap into some local know-how.

Many anglers, myself included, fish not just for the pursuit of quarry but because of the places that it takes you. The remote, the beautiful and if you’re very lucky, the untouched. The Mackenzie hydro canals are not one of these places.

As part of the hydroelectric power production in the South Island, Lakes Tekapō, Pukaki and Ōhau have all been joined by a series of large canals which run for many kilometres, often in a straight line. But these seemingly featureless pieces of water offer the chance to catch some truly impressive brown and rainbow trout, as well as an occasional monster salmon; escapees from nearby fish farms. The ease of access – roads run alongside almost all of the canals – and the ability to use various fishing methods – wet and dry fly fishing, spinning and bait – make this one of the South’s must-fish destinations.

While sea fishing requires no license or permit, freshwater fishing for trout and salmon does. It’s also important to check the size restrictions and bag limits of your intended catch. These differ around the country, so check the MPI guidelines before you go.

Waiting for these blissful summer nights

Fishing in New Zealand can be fun, rewarding, but also challenging. While the sea is easily accessible, fishing from rocks in unfamiliar areas can be dangerous. Check the tides and set an alarm on your phone if necessary to warn you of turning tides. Our long, thin islands in the middle of the Pacific Ocean can be broadsided by quickly changing weather patterns, so update your information regularly. If you prepare for the worst the weather can throw at you, you’ll be able to fish for longer and hopefully catch more fish. 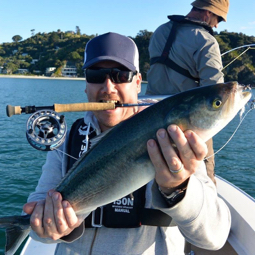 Angler, writer, chef and émigré Anthony McNamara often found himself in trouble as a youngster for always taking the long way home, especially if there was water close by. “Who can resist looking at water? Peering through that thin veil between worlds.”

Not much has changed in the intervening years but at least now, with the writing, he has a solid excuse for being late.

Lording over the Mackenzie region, Aoraki Mount Cook has become a symbol for what could easily win the unofficial 'most beautiful region in New Zealand' competition. Read the story . . .

The Far North: the tail of the fish

North of the Bay of Islands, things get a little wilder. This is Muriwhenua, the tail of Māui’s legendary fish, the northernmost tip of the country. Read the story . . .

Trout fishing: some of the best fly fishing in the world

Experience fishing at its very best in the wide, swift-flowing Tongariro River.  Read the story . . .

The Hauraki Gulf: islands of the north wind

The warm and sheltered waters of the Hauraki Gulf and its more than 50 islands have been home to humans for a thousand years... Read the story . . .

Angler, writer, chef and émigré Anthony McNamara often found himself in trouble as a youngster for always taking the long way home, especially if there was water close by. “Who can resist looking at water? Peering through that thin veil between worlds.”

Not much has changed in the intervening years but at least now, with the writing, he has a solid excuse for being late.